Top parks and reserves in Tanzania

Tanzania is a land of intriguing contrasts. Some of the most remote and wild game reserves in Africa lie alongside towering mountains and ancient great lakes, while just off the coast you’ll find a tropical island getaway that rivals the Caribbean. Tanzania really captures the spirit of Africa, a continent which is as diverse as it is complex. There are two safari regions here: the northern circuit and the southern circuit. We breakdown the most popular safari destinations in this captivating country.

The Serengeti in northwestern Tanzania is perhaps the most romantic of Africa’s game reserves. Its very name is enchanting, derived from the Maasai language and meaning “endless plains.” Along with the Maasai Mara in Kenya, it is the site of the Great Migration of 2 million wildebeest along with zebra and gazelle, who each year move in a loop between the reserves in search of grazing. They are stalked by numerous predators on the hunt, which only adds to the spectacle of the “greatest wildlife show on earth.”

But the Great Migration is not the only reason to visit the Serengeti. Alongside the endless plains, this vast ecosystem is made up of riverine forest and woodlands interrupted only by Ol Doinyo Lengai, the sole active volcano in the area. It’s home to the Big 5 as well as giraffe, cheetah, spotted hyena and other favourites from The Lion King, the beloved movie that is set right here in the Serengeti. It’s also a wildlife photographer’s paradise, renowned for its beautiful scenery and copious opportunities to capture wildlife on film. 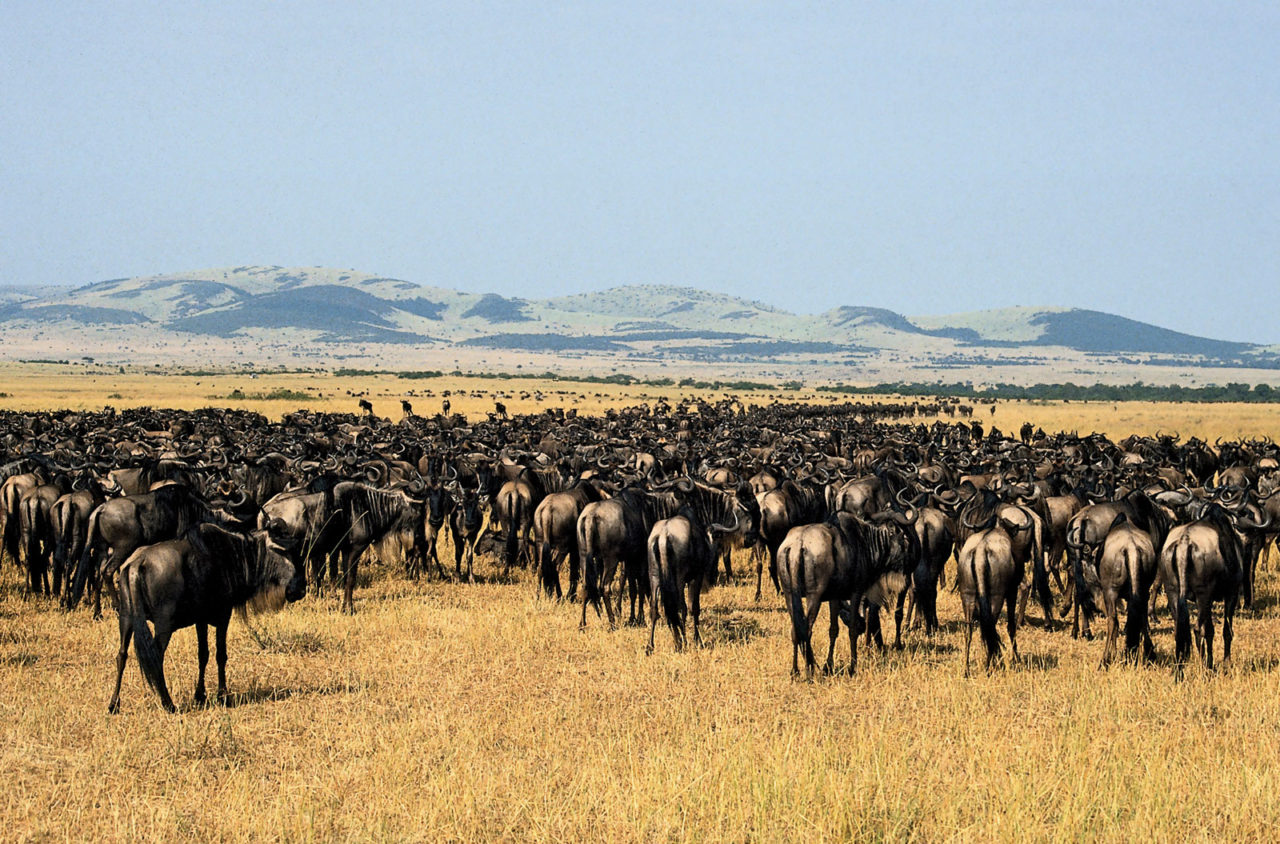 Quick facts: the Serengeti hosts around 400 000 visitors each year, the majority of whom come from June to October to see the migration. November to March is also an excellent time to visit, when the plains illuminate in lush green vegetation and baby animals are born.

Ngorongoro is one of the Seven Natural Wonders of Africa, an extraordinary reserve located in the ancient volcanic Ngorongoro crater in northern Tanzania. Not only is the crater the largest intact and unfilled caldera in the world, it is surrounded by a 600m high wall, creating a natural sanctuary for the 25 000 large game animals that live within it. It’s one of the few places in Africa where you can see the Big 5 in a single day.

The centre of this magical ecosystem is the alkaline crater lake which nourishes the lush grasses of the 260 square kilometre region. It provides blue-green algae that is the primary food source on the food chain, feeding hundreds of thousands of flamingos who gather on the lake’s shores. The Conservation Area is both an established wildlife sanctuary and a UNESCO World Heritage Site, making it the only region in the country that allows the cohabitation of humans with protected wildlife. 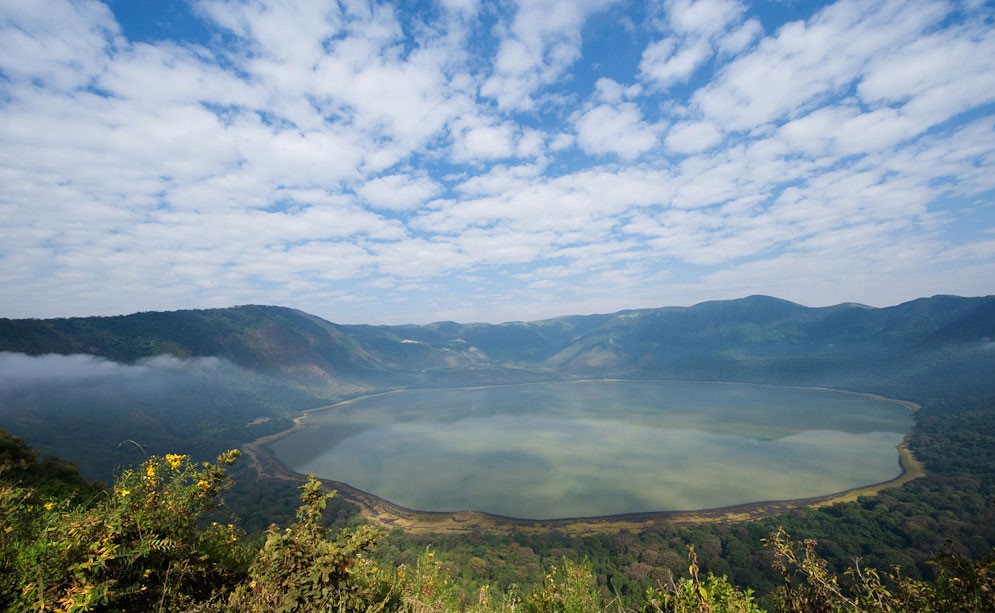 What’s in a name: the region was named by the Maasai people after the sound that cowbells made as their cattle grazed in the old pastoral lands…”ngoro, ngoro, ngoro….”

Northern Tanzania is where the hottest safari action is at. Tarangire is next on this safari circuit; a reserve that is still well known but generally quieter than its neighbours. Located in the Manyara region, this park is famed for its incredible concentrations of wildlife and breathtaking landscapes. It’s often a delightful surprise for travellers, especially if you stay for 2 days to really experience it, rather than follow the crowds who spend just one morning or afternoon on a game drive.

During the dry season from June to October the Tarangire River is the only water source in the region, drawing animals from all over to slake their thirst. Predators gather round waiting for their chance with herds of zebra, impala, eland and warthog, while elephants regularly appear in herds of up to 300. You might even spot tree-climbing lion here, right at home in ancient baobab trees. 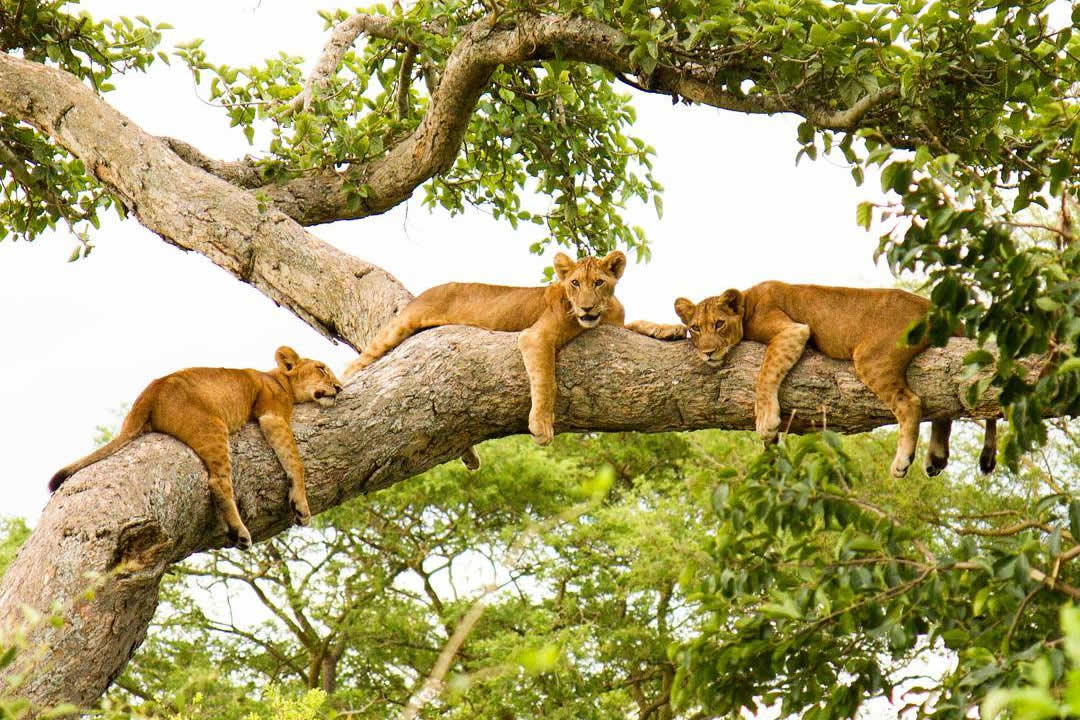 Birders take note: this is one of Tanzania’s top birding destinations with over 550 species calling the park home. Eagle eyes (see what we did there!) can spot northern pied babblers, bushveld pipits, shy starlings and yellow-collared lovebirds.

Described by Ernest Hemingway as “the loveliest I had seen in Africa,” Lake Manyara lies between Tarangire and the Ngorongoro Crater. It’s essentially a smaller version of the Serengeti and, like its cousin, has a supremely high concentration of large mammals. Most of the park is covered by Lake Manyara, a Rift Valley soda lake which is home to hippo, a multitude of fuchsia flamingos and many other birds. The rest of the park meanders between floodplains, hot springs, groundwater forests and savannah and is bordered in the west by the Great Rift Valley.

While famous for its large elephant population, the park hosts 11 unique ecosystems and a diverse range of wildlife, including many primate species. Look out of troops of vervet monkeys, bushbabies, baboons and the rather unfortunately named common monkey. 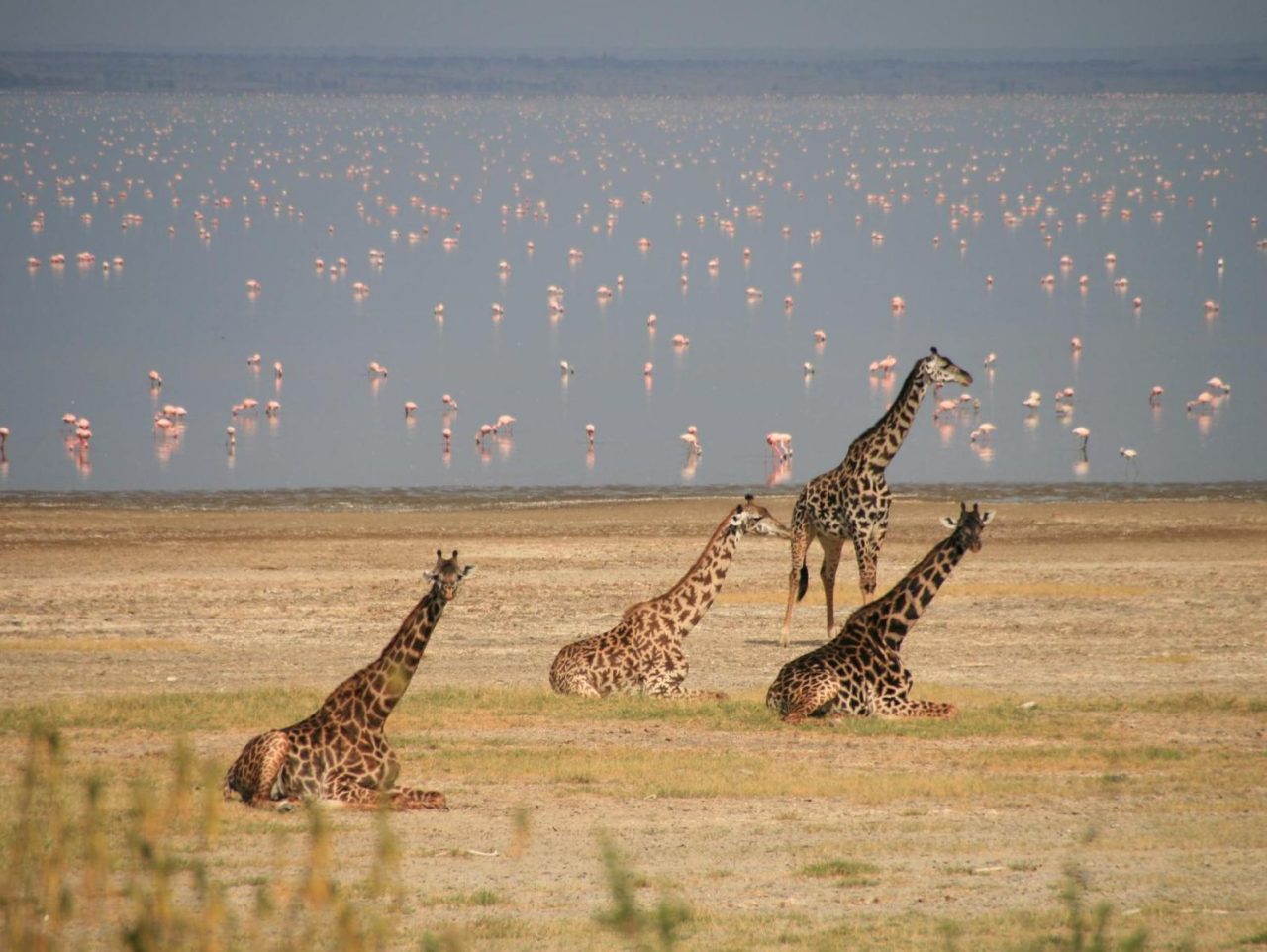 Don’t miss: Mountain biking, hiking, abseiling and forest walks in the close vicinity of the park. When the water levels are high enough, you can also canoe along the lake.

Northern Tanzania is the most popular region for safaris because of the Great Migration, while the southern safari circuit is comparatively remote,wild and devoid of crowds. Moving down south we find Selous, famous for being the largest game reserve in Africa. The reserve has an extraordinary concentration of wildlife but is largely unknown outside of serial safari enthusiasts. In addition to the Big 5 and other staples like cheetah, crocodile, giraffe, zebra and wildebeest, Selous is home to the increasingly rare black rhino, as well as around 50% of the world’s remaining population of wild dogs. In the dry season you’ll see some of the largest populations of buffalo and lion in the world; 120 000 and 4000 respectively.

The Rufiji River runs through the reserve, providing a lifeline to all who live there. In addition to game drives, you can take a boat safari through the rivers and wetlands and spot all manner of animals rinsing the African dust from their skin, including some 40,000 hippo who reside here. Walking safaris and off-road drives are also available. In Selous you’ll be thrilled with some of the richest wildlife in Africa without the crowds that characterise the north. 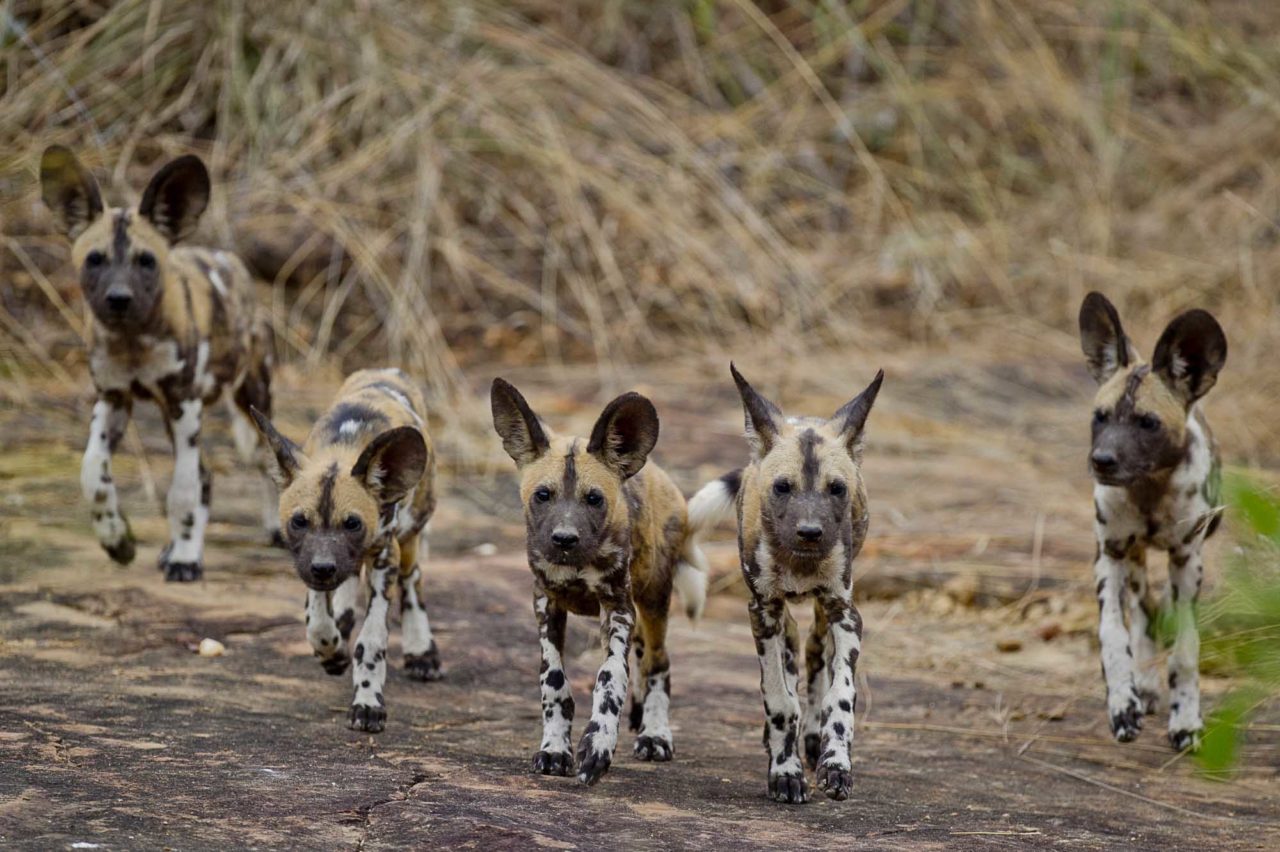 Ruaha is the largest national park in Tanzania but is nevertheless one of the country’s best kept secrets. Well off the main southern safari circuit, Ruaha is only accessible by plane. Landscapes of wild beauty include ancient baobab trees dotted across vast open plains, rolling hills and the lifeblood of the park, the Great Ruaha River.

The wildlife populations are as rich as they are diverse, including 12 000 elephant (one of the largest populations in Tanzania) and enormous herds of antelope such as roan, bushbuck, hartebeest, waterbuck and gazelle. The sight and sound of thousands of buck taking off at a gallop across the plains with predators hard on their heels in something you’ll never forget. 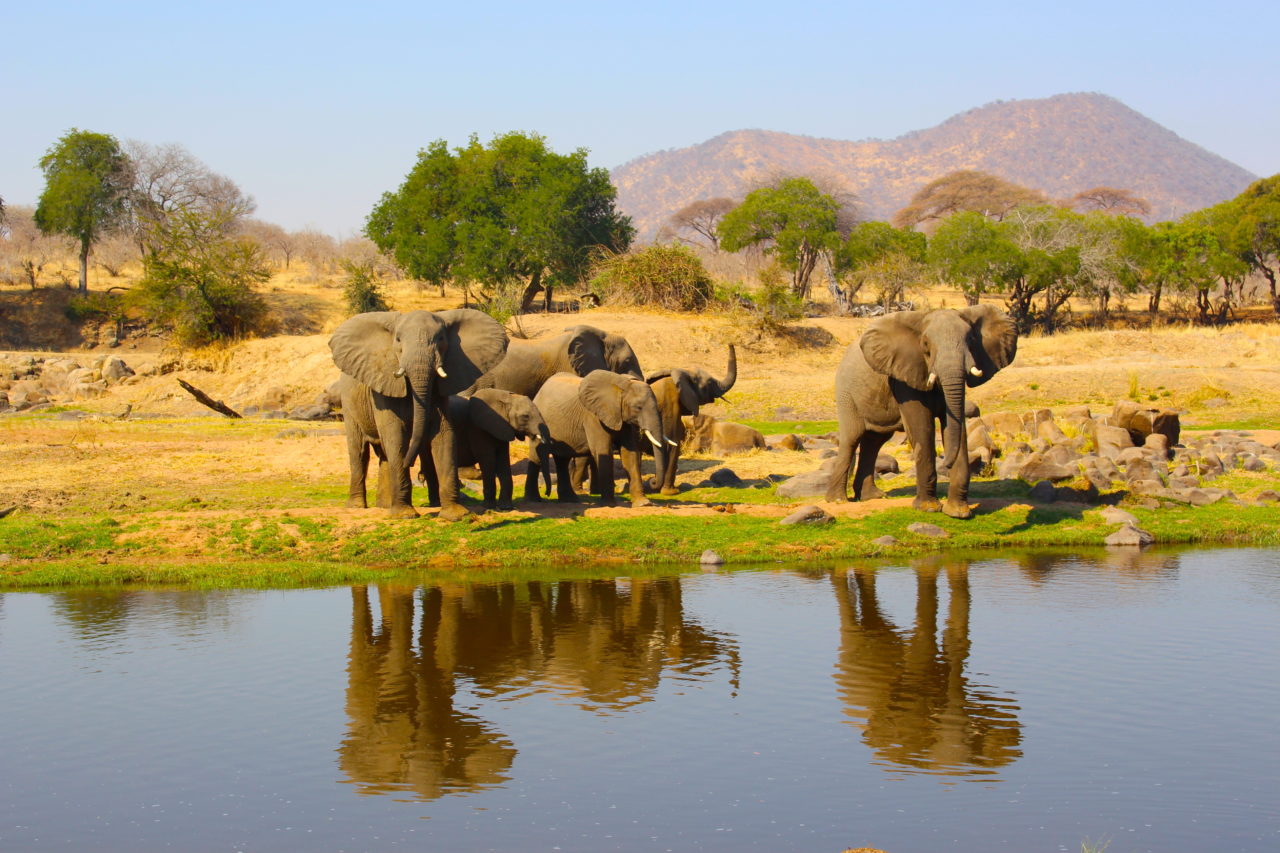 Take your time: We recommend a stay of 4 nights so you have plenty of time to journey through the great expanse of the park.

For more Tanzanian inspiration, take a look at our itineraries that cover both the north and south of the country as well as the spice island of Zanzibar.