Behind the scenes at Thula Thula Private Game reserve

Young explorers Gia (16) and Indi (15) continue their road through KZN on their bush & beach winter break. On this adventure, they spend time in Thula Thula and take a look at what goes on behind the scenes at the reserve’s Volunteer Academy.

We arrived at Thula Thula Private Game Reserve to be met by Francoise, the co-founder of Thula Thula. Francoise and her husband, Lawrence Anthony, who sadly passed away in 2012, bought the existing hunting reserve in 1998 and have since created a wilderness Eden in the heart of Zululand.

Just being in Francoise’s presence, you can tell what a strong human being she is. After spending time at Thula Thula, we could see how greatly respected and loved she is by everyone. We chatted to her for a while before heading off to the Volunteer Academy (VA) where we met Nick, who heads it up. He kindly showed us around this fantastic opportunity to experience conservation “behind-the-scenes”. 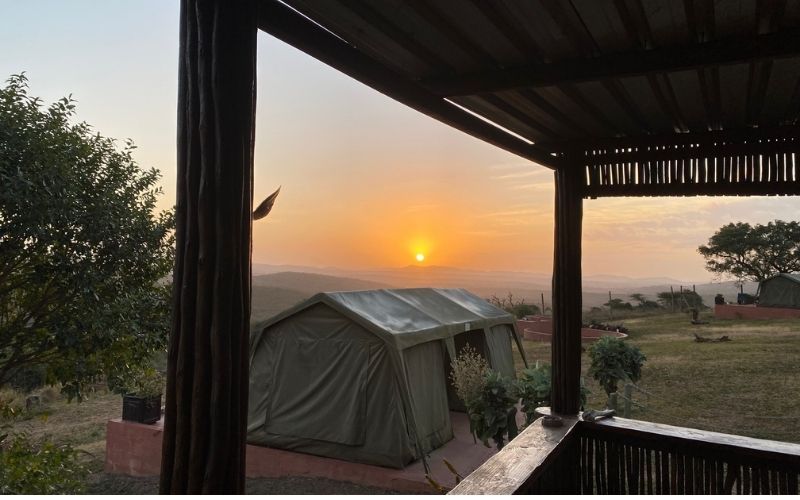 Nick was very funny and kind and you could tell by his infectious passion how much he loves his job. He was one of the most knowledgeable conservationists we’ve ever met. We sat around the fire chatting about conservation and the history of Thula Thula, and we met the other guests who were on a photography workshop that is run by longtime Thula Thula photographer, Kim McLeod. Kim’s photography is legendary and her courses are extremely popular – you can find out more about them here.

The stories about Thula Thula are simply fascinating – so much so that we bought and read their two famous books while on our road trip: The Elephant Whisperer and An Elephant in my Kitchen. After a delicious supper, we fell asleep to the sounds of the bush. 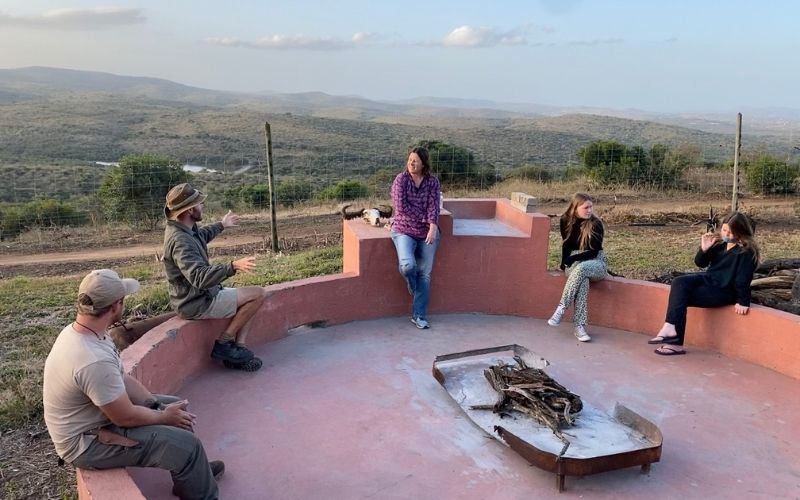 We awoke early in the morning and went on a busk walk around the reserve with the anti-poaching unit, looking for snares. It was so incredible to hear their stories and why they do the job they do. These men are so inspiring with their dedication to and love for the animals. 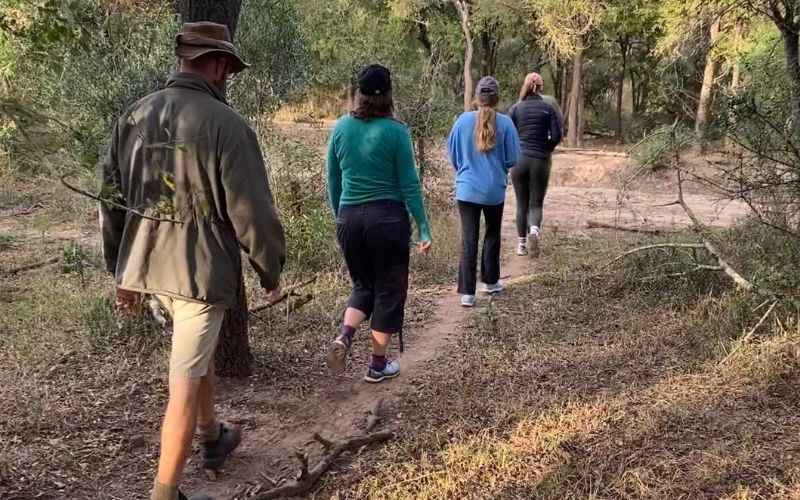 The wire snares used by poachers do so much damage to the animals who become trapped – it was very sad to see it firsthand. The fight against poaching feels like a neverending one and it made us admire these rangers even more. On the snare patrol, we saw a large journey of giraffes, nyala, impala and some white-backed vultures soaring through the sky. 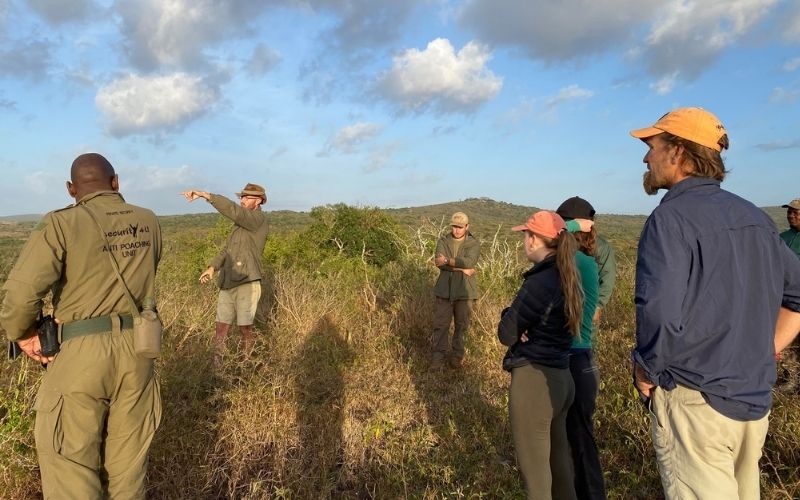 breakfast Nick gave us a tour of the VA facilities, sharing stories of animals they have rehabilitated at Thula Thula. It was very funny to hear the names that had been given to the rescued animals – each one has its own unique story. Nick then taught us how to make rope out of mother-in-law’s tongue by separating the fibres and then platting and re-platting until we had a decent length of very strong rope.

We spent some time relaxing and had lunch before setting out on our afternoon game drive, which was just incredible. Nick drove us to where the elephants were playing in the mud and browsing. The elephants slowly came up to the vehicle and started whipping mud on it. They were so close that if I reached my little pinky finger out of the vehicle, I could have touched one.

The elephants slowly waved their trunks in the air trying to smell us. One started chewing the back corner of the roof! Nick was very calm and that made us feel calm too. We were in awe of these giants and we felt so grateful for such a special, close encounter with the herd. 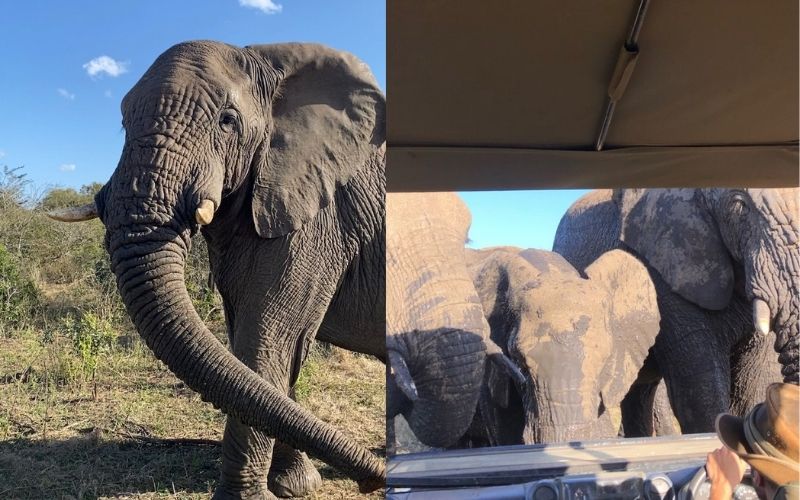 We then set out to check the camera traps that Nick had set up. Part of conservation is studying what animals are on the reserve to ensure a balance. The camera traps showed pictures of nyala and hyenas, but the one that Nick was most excited about was the red duiker as he was unsure if they had any. The presence of red duikers told Nick that there’s not much hunting with dogs happening on the reserve. He was hoping to get a picture of a leopard, but they didn’t come out this time.

That night we were kindly invited to have dinner at the Lodge. On the drive there, Nick was very excited and determined to find hyenas, but all we saw was a massive family of giant rats having a gathering in the middle of the road! We had a delicious buffet dinner around the fire and really yummy dessert. A bushbaby called above us in the large tambotie tree. Nick told us more about what the volunteers do on their multi-week stays and it made us both really keen to come on a volunteer trip one day.

We headed back to our camp, satisfied and full of plans for the future. Elephant Safari Lodge and the Luxury Tented Camp offer both international and South African guests a five-star bush experience in Zululand – perfect for combining with the warmth of the KZN North Coast beaches for a Bush and Beach break. 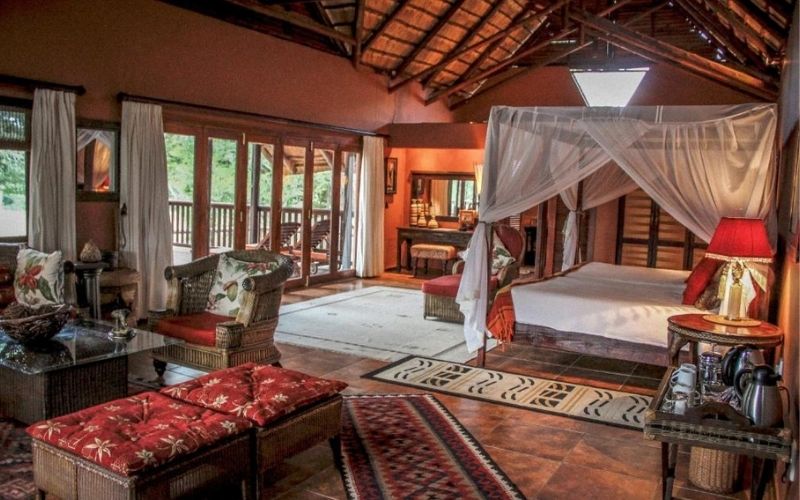 Unfortunately, we had to leave very early in the morning for our next adventure – a 5-day wilderness trail in Hluhluwe-Imfolozi. We were very sad to say goodbye – time really flew by during our stay at the VA. Thula Thula made us feel so welcome from the second we got there to the very end. It felt like a home away from home, full of very friendly and interesting people. Thula Thula has this feeling of family between humans and animals that we have never experienced anywhere else and truly has conservation as its highest priority. We will forever be grateful for this experience. 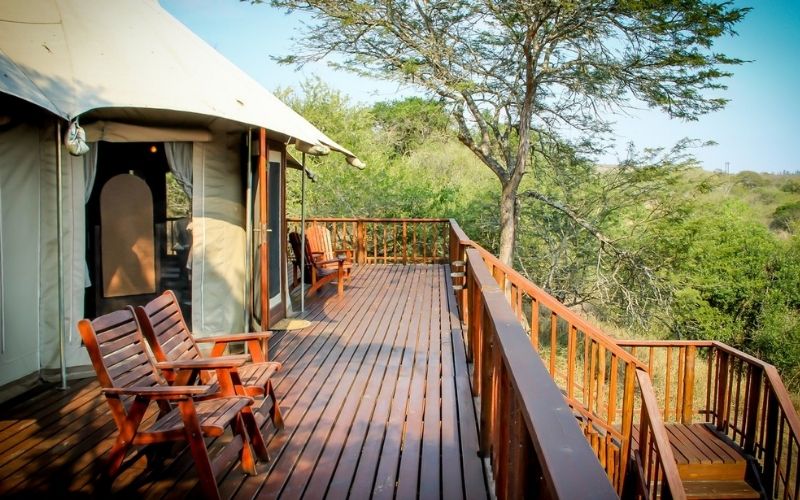